Storybricks: The Rehumanization of Roleplaying Games

Anyone who has followed this blog for any length of time will know that I tend to look at game design (like everything else) from a fairly high-level perspective.

Other people are good at speaking to the mechanics of specific games, or at advocating for concrete gameplay content. My interest is usually directed toward the design of core gameplay systems that could help make interactive worlds more engaging for people who enjoy simulation and narrative -- that is, for the Explorer and Socializer gamers among us.

This is why I've developed numerous ideas and criticisms around the goal of helping gameworlds feel more "alive." In particular, I've criticized the practice of building Non-Player Characters (NPCs) as nothing more than loot piñatas (pop them for goodies!) or static props handing out quests and dispensing pellets of experience points. They look like people, but they don't act like people. Their inhuman behavior leaves a gameworld feeling more like a wind-up toy than a world filled with interesting people -- once you've seen its limited repertoire of behaviors, you're done with it.

This is radically different than -- and a serious step back from -- interacting with the complex, fascinating, frustrating, dangerous, and lovable non-player characters found in tabletop roleplaying games. In these games, where NPCs are played by humans, characters have character.

The roleplaying part of tabletop roleplaying games was a remarkably humanizing play activity. Pretending to be a person with abilities and desires other than your own could reveal unexpected abilities and motivations in yourself. How many areas of human experience can say that?

But in translating roleplaying games to computers, much of the human touch was lost. With so many other systems to develop (especially the systems for character leveling and combat), the developers of most computer-based RPGs somehow never got around to recreating what was arguably the most important part of a roleplaying game: interacting in interesting ways with interesting characters.

(BioWare deserves credit for trying to bring interesting characters to life in their computer RPGs. No one forgets Minsc. But massively multiplayer online role-playing games -- called MMORPGs for the obvious reason -- have not yet given anywhere near the same level of attention to NPCs, and BioWare's Star Wars: The Old Republic took years to fill with hand-developed content.)

In a way, many of the concepts I've suggested over the past decade have been attempts to address this problem of characterless characters. A couple of notions in particular are specifically meant to help NPCs feel more interesting by building into them a greater range of perceptive and expressive capabilities.

One thought was to enhance gameworlds with specific environmental effects, such as day/night cycles and sound propagation, while also allowing NPCs to perceive these environmental effects and respond to them in reasonable ways. An NPC who can realize that some meaningful event is happening and respond to it is a much more interesting character than one who just stands there oblivious to local reality.

The other key suggestion in this area is something I called "multifaction." In today's MMORPGs, when you do something for a particular NPC, that character may be able to "remember" that your action helped the one group to which that NPC belongs. This notion of "faction" is good for creating a very limited social fabric -- members of the Rebel Alliance love me, but I'm shoot-on-sight to Imperial stormtroopers -- but it's inexplicably underused.

Why can't I have faction with individuals rather than just groups? Why can't individuals and groups have factional standings with each other so that when I do something nice for Person A, who is disliked by Person B but loved by Person C, Person B likes me less while Person C likes me more? Why isn't faction used to enable persistent-world computer RPGs to store and express the complex webs of social relationships that give human existence its emotional richness?

There are plenty of games that emphasize points-gathering and loot-collecting and level-raising. And it's good that there are such games.

But where are the games that support internally complex and logically consistent worlds filled with characters who act like people because they can perceive their environment and can form and attempt to satisfy emotional goals?

Well, I have some good news to report on one of these fronts. If the folks at Namaste have their way, NPCs who can express emotionally plausible behaviors may be standing just around the corner, waiting to meet us.

I was recently given the opportunity to see an early build of Namaste's "Storybricks" system in action. If any of what I've said so far is of interest to you, you should visit Namaste's Web site to see for yourself what they're doing.

In the meantime, here's a brief description: Storybricks is a set of systems integrated into a gameplay environment that allows NPCs to have emotional goals and states and to act on those goals and states in plausible ways through their relationships with players and with each other. (Note: this statement and all that follows here are purely my personal interpretation of Storybricks. For the official facts about Storybricks as it is developed, please refer to Namaste's site.)

Initially, Storybricks allows players to create characters who have particular motivations and goals ("drives"), some of which may come from a role-based template (Peasant, Shopkeeper, Guard, etc.), and others which are added to particular characters by their creator. All drives implemented in a Storybricks gameworld have in-game actions through which they can be expressed, as actions (along with objects and places) are all linked through the central AI system at the heart of a Storybricks gameworld. This allows characters to have plausible emotional goals and states based on their role, but also to have unique sets of interior motivations, some of which may actually oppose each other.

Cuthbert the Guard Captain, for example, may be designed to be motivated by duty and honor, but also by avarice and impatience. Under normal circumstances, all that a player may see of Cuthbert is his upholding the law... but what might happen if the player presents Cuthbert with a bribe?

Another possibility: Cuthbert the Guard Captain believes that order is important, and that it is necessary to defend the king in order to maintain order. But Cuthbert hates Baldwin the Noble... so how does Cuthbert behave when Baldwin usurps the throne and becomes king? 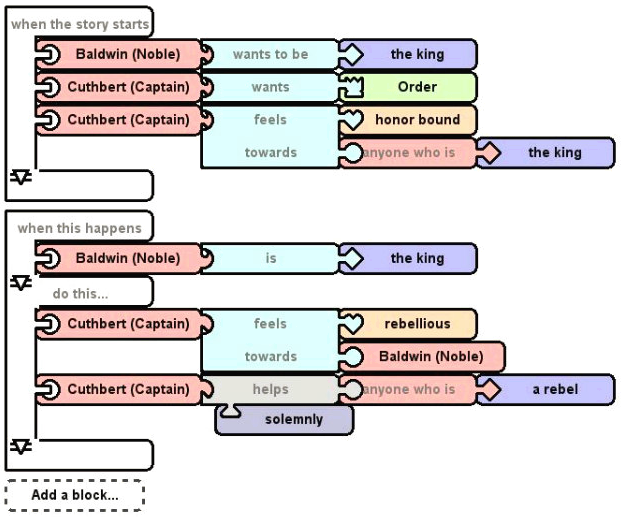 This ability for NPCs to have conflicting internal states immediately makes Storybrick's NPCs vastly more interesting as characters than the people-shaped automatons standing in for NPCs in today's MMORPGs.

Storybricks also allows NPCs, like player characters, to have relationships with multiple NPCs. By "relationships" I don't mean romantic alliances (in, say, the Mass Effect/Dragon Age sense). I mean relationships in the sense of holding various kinds of feelings in differing degrees toward players and other NPCs. Alfgar the Citizen may like you, while Edward the Brigand may despise you, and these NPCs would be able to act on these relationships in appropriate ways. 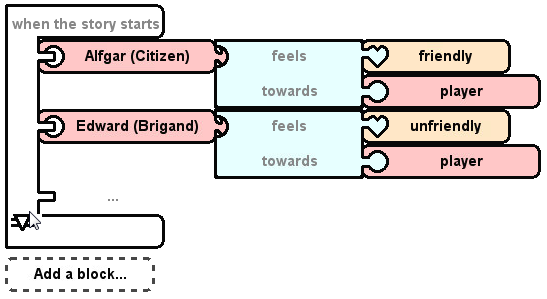 Further -- and approaching the "multifaction" concept -- perhaps Baldwin the Noble likes you, while Ethelred the Peasant likes Baldwin. If Ethelred observes that you have done some harm to Baldwin, this may change your relationship with Ethelred even if you don't directly do anything to Ethelred.

Taken to its full extent in a gameworld, this capability for second-order effects instantly propels MMORPGs toward becoming games that can tell interactive stories as good as those of their tabletop progenitors. Instead of forming (and farming) isolated factional standings with faceless groups, players in a gameworld designed around the Storybricks system swim in a chaotic sea of ever-shifting personal alliances and emnities, where actions over time can lead to consequences that are hard to predict. At last, computer-based NPCs may soon have what characters in tabletop RPGs have always had: the power to surprise.

People yield interesting stories not when they do what we expect of them, but when they shock us by revealing hitherto unknown aspects of themselves. We expect Sarah Connor to protect her child, but we don't expect her to do it by aggressively hunting down those whom she considers threats. We expect Sam Gamgee to care for his friend Frodo, but we don't expect him to become an action hero in taking on the horrible spider Shelob. The twist is plausible but unexpected, the result of putting a person with complex internal emotions in a stressful situation that reveals something of the character's true nature. And that depth of character is the engine behind every great story.

Storybricks is important -- perhaps the most important new technology in MMORPG development in many years -- because it provides the technological foundation for creating characters with emotional depth in computer-mediated gameworlds. This enables the crafting and emergence of captivating stories, a vital source of gameplay that's been absent from online persistent-world computer RPGs (including the few now allowing players to create quests).

It's always tempting to try to understand new things in terms of what we currently have. But there really hasn't been anything like Storybricks before. The possibilities it offers for experiencing a gameworld in which NPCs feel like people instead of quest pellet dispensers is tremendous.

Not everyone will want this, and that's fine. There are games available today for those who prefer to always know where to go and what to do, as there should be. But for those who have been wanting NPCs to play a more compelling role in building gameworlds as satisfying secondary realities, Namaste's Storybricks is by far the most exciting concept in a very long time.

I'll have more to say about the mechanics and internals of the Storybricks system in a later blog entry.

For now... here's looking forward to the rehumanization of roleplaying games.
Posted by Flatfingers at 2:09 AM

Flatfingers
Back in my misspent youth, I used to spend my nights either programming or playing keyboards at parties. One night (at a party) a friend yelled out, "Hey, he's been spending so much time with keyboards that his fingers are flat!" And thus was born Flatfingers.